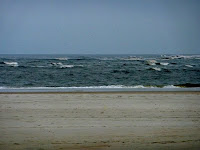 All it takes is one teenager living under your roof to convince a person that you need to let some of the small stuff slide and save your energy for the big battles. If you have three teenagers like we did, that becomes a necessity.

Life at Apple reinforced the view that you just need to accept some things and be willing to fight for some others. I cannot imagine telling Steve Jobs that he needs to start sharing secrets with employees.

This afternoon I got confronted over on the Point at Emerald Isle by a somewhat crazy lady. But before we get to that story, you need to understand that living and driving on the North Carolina coast where we live demands attention to the speed limit.

In the off season, when there are not enough tourists to watch, the police have little to do except catch speeders. The consequence of this is that you learn to drive very close to the speed limit, or you end up with a ticket.

I try really hard to stay below the speed limit because if you do not and end up with a ticket, your insurance rates go up. I have managed three years down here without a ticket, and I drive a lot. I am also knocking on wood as I write this.

Today we spent a few minutes talking to the Mayor of Emerald Isle. The town's new administrative office had used a number of my prints for decoration, and we had stopped by to see them. I asked him about the recent flooded streets, and after talking, we decided to go have a look ourselves.

So we drove down Coast Guard Road, and we found more water than we expected. Driving through water as deep as we found requires driving slowly unless you want to stall your car, so we were driving especially slowly since my wife does not like axle deep water.

We finally got to where Coast Guard Road runs into Inlet Drive. I stopped and made the turn to head to the corner where you can access the Point. Less than halfway there we passed a "lady" walking a dog which tried to take a bite out of my car. Instead of walking on the shoulder of the road facing traffic as the law requires, she was actually walking with her back to traffic in the middle of the lane where I was supposed to be driving. I moved over to the other lane, and as I did not think it was any big deal, I went on down to corner, turned around, parked, and walked up the ramp to shoot a few pictures.

It only took a few minutes, I got back in my car and headed out except the "lady" was blocking my way. I rolled down my window, and she said she wanted to remind me the speed limit was 25 mph because I was flying through the neighborhood and two children lived there.

About that time her dog jumped on the door of my car, I pointed at her dog, and told her to drop it. I rolled up my window, and we left. As we were pulling away, I asked my wife what speed she though I had been doing. She ventured that I might have been doing 25 mph, but that she doubted I could have been going any faster since we passed the lady so close to the stop sign.

Tonight I used Google tools to measure the distance between the stop sign and where I pulled over to take pictures. It is around 1685 feet. Assuming I had traveled less than half the distance when we passed the "lady," I had gone less than 800 feet. If you have ever ridden with my wife, you would know she is not a big fan of fast starts. That being the case, I do not do them.

So why was my accuser so upset? Perhaps her dog being upset when we drove by carried over to her. I suspect that when walking down the middle of street, anything driving by you appears to be flying. While it is the beach, it is also a road which my car has as much right on as our walker and her dog. Actually I believe she is supposed to walk on the shoulder of the road and not take up my driving lane, but like I said, it is the beach so we yield to people walking in the road.

However, to get back to the point of my post. You do need to pick your battles wisely. I have probably been down that same road 200 times in the last few years. I have passed literally hundreds of walkers, many with dogs, and more than I can count with small children. No one has ever blocked my exit and accused me of flying through the neighborhood. That is because I do not do it.

So here we are on an Island with strictly enforced speed limits, and we have someone blocking the road to complain about someone who was likely doing the speed limit or very close to it. I could have chosen to argue with the walker, but long years have taught me that she was the type where you can never win a logical argument. Her perception, right or wrong, is all that she would ever believe. She was definitely one of those, don't confuse me with the facts, my mind is made up people. Picking a battle would have been a waste of my time. She had already wasted hers.

I started thinking the walker could have used her energy more wisely by complaining about some much more serious problems to people who might actually listen to her.

Before we had stopped by the Mayor's office, we had visited with the folks at Reel Outdoors. The talk there was of the damage that gill nets are doing to the fish and turtle populations.

It is a serious problem, and one that bothers many of us. Then there is the problem of beach access. Our walker apparently lives along the road to the Point. There are a couple of very nice beach accesses there, but the only parking which is a good distance off on Coast Guard Road is often full in the summertime.

Many of us who would like to take advantage of all the state funded CAMA accesses would love to see some parking on Inlet Drive so that people who want to fish the Point do not have haul their gear so far. I suspect our walker would oppose that, but I know that some additional parking would be very popular with a lot of the population that does not happen to have a home on Inlet Drive.

I hate to point it out, but the beach below the tide line belongs to the people of North Carolina and eventually the majority might rule in the case of beach access.

Beach access and banning gill nets are both battles worth taking up, but I think speeding on Emerald Isle is pretty well under control
Posted by Ocracokewaves at 7:25 PM