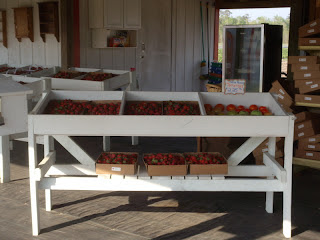 After college in the seventies, I moved to Nova Scotia. I wanted to own some land. There was nothing affordable on the east coast of the United States  like the 140 acres, house and barn that I got on the Bay of Fundy near Bridgetown, Nova Scotia.

Having lived in Boston for the previous four years and awakening one morning to find nothing but a pile of glass where my car once was, I was initially surprised that many of the produce stands in the Annapolis Valley would operate on the honor system.

There would be produce, a scale, and a box or can for money. Sometimes the money containers would be attached to the stand, but often you could have walked off with the money with little effort. Though I am sure robbery happened, I never heard about it.

Even today in our fairly rural area, I know a fair number of spots where people could make off with products that aren't locked down yet I don't think it is huge problem with those businesses that are still in areas like ours where most of the people are trustworthy.

Still I doubt that many places remain like the small village of Tay Creek, north of Fredericton, New Brunswick in Canada where our farm was for 17 years. I can't ever remember taking the key out of our pickup truck, and we never had a lock on the house until we moved. We just didn't need it.

I spent nearly twenty years at Apple and got to see first hand how the drive for success can change people.  It occurs to me that whether intentionally or not Steve Jobs created a pressure cooker environment where resources will forever be tight and the expectation is that there will be no excuses unless you are so high on the corporate tree that mistakes are never your problem.

It creates something of a moral wasteland where people tend to look out for themselves and just be thankful that they have survived another year. It is something like a fruit stand where selling the fruit and making the most money off of it eventually becomes more important that producing great fruit.

You hear lots about what a creative place Apple is, but I doubt you will ever hear anything about how ethical Apple is. The simple reason is that Apple is a company which has pretty well institutionalized the idea that the ends justify the means. If there are a few employee bodies scattered along the way, what does it matter as long as the end result is that another great product makes it out the door to help grow the company's reputation? When the products begin to lack greatness, the body counts will grow.

I doubt that type of environment has made Apple products great. I do know that it has created an environment that most people would rather forget than talk about when they leave the company.

I worked at Apple nearly twenty years, and I never saw any ethics training in my career there. I heard a vice president say you should make sure you didn't save any of your email because it might get the company in trouble.  I know lots of employees who lost their jobs because they were on the wrong side of a corporate struggle that they did not even know was happening.  It is unfortunate that

collateral casualties during internal struggles have become such a part of corporate culture in America.

There are plenty of companies just as bad or even worse than Apple. The challenge is that Apple lives in a glass bowl.  Lots of people assume life on the inside of the great Apple mother ship is wonderful and yet they have never walked inside the halls of Cupertino much less worked there.

I was in real estate for a few years and ethics were a big part of the job.

While having a code of ethics certainly is not a perfect solution to bad behavior, it is certainly better than the free wheeling world of technology where anything goes.  Of course Realtors® in most states live with the knowledge that consumers can easily complain about their behavior with just a few mouse clicks. I am sure knowing the NC Real Estate Commission is watching is a good thing for many people who might stray from the straight and narrow.

Having that code of ethics behind you, makes it a little easier to stand tall for what you believe, but in reality it only reinforces what you have grown up with from your youth.

If you grow up a Boy Scout and graduate from McCallie, during its days as a military school you learn about Honor, Truth, and Duty. My college had the simple Latin word of Veritas as a motto. All of that builds character as my mother used to say.

Still we can all learn from the fruit stand vendors of Nova Scotia. If you build your business on trusting your people instead of creating a climate of fear, you might have an organization that does the right thing by default.

You can read about our early years in Nova Scotia in our $2.99 Kindle book, A Taste For The Wild - Canada's Maritimes.

Posted by Ocracokewaves at 7:17 PM No comments:

What makes me happy?

Figuring out what makes you happy at any given point in your life is always a challenge. I spent a good part of my childhood trying to get away from North Carolina or Mount Airy to be specific. Now I am happy living in North Carolina.

A few years ago, we got the opportunity to spend a lot of time in the Mount Airy area. It felt like home. As we started looking for a place to spend the next ten years, we started spending lots of time looking in North Carolina.

Spring in North Carolina or southern Virginia is a pretty special time. These pictures of my family's home place in Mount Airy capture some of the spring feeling just as the Dogwood picture in the post does.

While the beauty of spring or these inviting waters near Emerald Isle, NC might attract you to an area, to be really happy, you need more than a beautiful spring or warm ocean waters.

In the end it is the people of an area, perhaps even the culture of the area that ends up being the most important factor. I have found friendly people in almost every area that I have lived. Some of the most supportive neighbors that we ever had were on our wilderness farm in Canada.

However, from that perspective I think parts of North Carolina and parts of Virginia where the local culture and traditions still survive are among the friendliest places that I have ever seen. The openess of people and the willingness to help are rare traits that are a little harder to see the farther north you go or the deeper you get into urban areas.

I think a couple of places that I have lived in Canada have helped me understand what makes this possible. One was Ste. Croix Cove, Nova Scotia which was a very isolated coastal community where the same families had lived for years with little change. My welcome to the community there was someone running down my Labrador Retriever on purpose. Outsiders while welcomed by some, were distrusted by most. It was as beautiful a place as you have ever seen in the summer, but when you don't feel welcome in a place, you might as well move on. We did.

The next place we lived was in the wilderness about twenty miles north of Fredericton, New Brunswick. We had farm of two hundred acres. We were welcomed by the community with open arms. The difference I believe was that Tay Creek had seen and accepted new comers for many years. They were viewed as the life blood of the community. We spent eleven wonderful years there and made some great friends with whom we still communicate.

I think much of rural and small town North Carolina and Virginia are similar. They have seen many changes and have adapted to them. By in large, people are very accepting of people with different backgrounds.

So if I had to put one thing high on my list of being happy, it would be acceptance by neighbors. We have had it in Roanoke, Virginia and in Cape Carteret, North Carolina. Both places have stunning natural beauty on top of friendly people.

While you might have to search for the right neighborhoods in a particular area that are open and friendly to newcomers, it is well worth the effort. Talking to the neighbors in your potential new neighborhood is also an important step in evaluating what will make you happy.

With one foot on the mountain and the other in salt water, I live in great neighborhoods both in Cape Carteret and in Roanoke. As a Realtor® I would be glad to help in Cape Carteret or refer you to a good Realtor® in the Roanoke or Blacksburg, Va. area.