April at the Beach 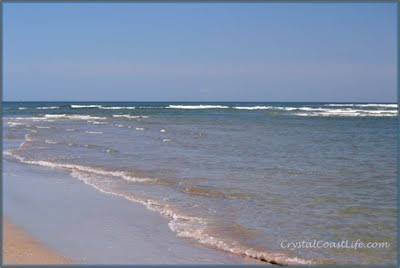 Lots of folks think the only nice time to be at the beach is after the middle of June.  While it is true that the ocean water is warmer in mid-June, there is a lot to be said for an April beach visit.

One of the nicest things about coming to the beach in April is that there is so much space that you will think that you own the beach.  Most people don't swim in the water anyway, so if you are just looking to relax on the beach,  is April really a good time to visit North Carolina's Crystal Coast.

As it is with much in life, the answer is "It depends."  The only way that you can count on beach weather is to live here and never leave.  Then you will be assured of finding some great weather. You can, however, find some great weather in April along North Carolina Southern Outer Banks which tend to warm up faster than the more famous beaches of Nags Head, Duck, and Manteo.  Still whether or not you beach visit will be a great one does depend on the weather, and that varies from year to year.

April 2011 through April 20 has been a stellar month with mild temperatures and very little rain.  While we have seen our share of wind, it has mostly been wind that could be ignored.  We can have wind here that is very hard to ignore, but so far in April 2011, the wind hasn't kept me off of the beach very much.

So if your April beach trip is somewhat dependent on the short term weather, it means that you might be better off waiting until the last minute to book your trip.  Actually for most of April that will likely work.  Easter weekend which this year is April 23 and 24 might be an exception.  It is late enough in the year to give people some hope of real warmth, so I am guessing that we will have a good crowd especially since we have some eighties in the forecast.  But even if we have a good Easter crowd, it will be nothing like a 4th of July crowd.

On Emerald Isle almost everything stays open all year, so even in early April you can find all the area restaurants and services open.  The only thing missing this year at Easter will be our McDonald's in Cape Carteret. The restaurant is being rebuilt.   There is also a new Dunkin' Donuts being built in Cedar Point, but it won't be done until summer.

An April beach visit often means that you can get a great deal on accommodations even at the last minute, and still have plenty of space on the beach for yourself.  With one or two exceptions, you will likely be able to walk right into most restaurants without a wait.

As of mid-April, the water temperatures are already in the mid-sixties and climbing.  I went surf fishing earlier this week, and standing in the water was not a problem.  I did see some people out in the water, and not all of them were youngster. However,  I figure for the most part that they must be Canadians or New Englanders seeking any hint of ice free water since most locals usually wait until June before they dunk their whole bodies in saltwater.

April weather is certainly nice enough for kayaking on most days as long as the wind hasn't kicked up.  I have already been out a couple of times myself.  So far it has been a little windy for a whole afternoon of fishing from a skiff, but the wind can stop at any time. You can't enjoy those rare moments unless you are here.   I managed to get one short skiff  fishing trip in during March but that has been it so far.  There will be plenty of time for more fishing as the water warms.

So if you want some pure relaxation, fewer crowds, and lots of room on the beach, come visit us in April.  One of the hidden benefits is that in April the weather is so nice that we often sleep with our windows open.  It has been nearly three weeks since our heat pumps have run.

I have been walking the beaches regularly, and I can assure you that they are in fine shape for those beach hikes.

And if you need one more reason, the local strawberries are ripe, and as usual,  they are delicious. Produce is starting to come to the stands, we had new potatoes and local asparagus for dinner on Tuesday night.  There is nothing like fresh produce and some fresh fish with near perfect strawberries for dessert to make you certain that spring is here, and summer is on the horizon.

This is my Emerald Isle Travel Guide to help you plan your trip.  You can find out more about the Southern Outer Banks at my Crystal Coast Life Blog.
Here are some pictures that I took on my most recent hike along the beach.
Posted by Ocracokewaves at 7:45 PM No comments: