I spend lot of time working on my websites. I try to keep my main Southern Outer Banks site in sync with the weather.

This year, there has been almost no cold weather to get me to change the site. I keep shuffling a few words around and doing a new picture once in a while, but the information about the weather is almost always the same.

I can call it "Endless fall" or "Winter in retreat," but the reality is that we are having temperatures that make winter look far off. Today, December 28, the temperature approached 70 degrees Fahrenheit.

If you could zoom in a little more on this image you would see a lone paddler in the kayak on Bogue Sound. We were watching from a pier on Cedar Street in Emerald Isle.

Most of this week, the beach has been deserted, but it hasn't been from bad weather. As I am sitting here typing this in our kitchen the window next to me is open.

I certainly have no complaints. I moved to the coast to get away from ice and snow. Seventy degrees at the end of December is a good way to accomplish that.

I find it a pleasure just to walk to the mailbox without a coat. There were a couple of days just before Christmas when I went back to shorts. I might do it again tomorrow.

The warm weather has allowed my coastal blog to stay on top of the weather without a lot of editing.

That is fine by me. I see in the long term forecast that we have a spell of cold weather headed our way by the middle of next week.

That is okay too. I would rather have that cold stuff in January than in March. Last January we had nineteen hours of below freezing temperatures. I hope we have even less this year.
Posted by Ocracokewaves at 5:57 PM No comments: 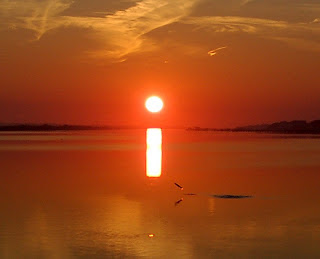 I snapped this shot earlier this week.

I was at Cannonsgate, a new development along Bogue Sound on North Carolina's Crystal Coast.

I prefer to call the area the Southern Outer Banks which is a popular name if you measure it by the number of "SOBX" license plates on the pickup trucks that are so popular in the area.

When I snapped the picture of the Bogue Sound sunset, the only thing moving was the Jumping Mullet. I was actually hoping for a boat to come along so the lines on the sunset would not be so perfect.

The first part of the iAge happened to be computers that you could buy in different colors. Apple long ago abandoned that thought since retailers got pretty irritated over having to stock different colors of computers.

Another part of the iAge as presented by Apple was the Internet. The iMac was easy to hook to the Internet through an Ethernet connection to a cable modem. It an entry level computer that also came with no way to back up your data onto floppies. Apple quickly gave that up also and started shipping computers with drives that would burn CDs.

Still the theory was that the iMac was your gateway to the Internet. Exploring the Internet was an individual thing back in those days.

I think there has been a fundamental shift. We now explore the Internet not so much individually but as a connected family. We share links through spots like del.icio.us. Some of us are even on Facebook, and there appears to be no shortage of blogs.

The iPod may still be a wonderful commercial success. There are plenty of folks whose obsession with their cell phone makes you think they only care about themselves.

Still the "iAge" is in retreat. I am hoping the "weAge" will be just as much if not more fun.

I find exploring the world with the help of friends a lot more fun than doing it on my own.
Posted by Ocracokewaves at 5:16 AM 1 comment: