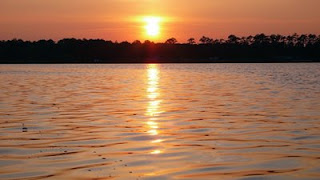 Our word is strange place these days. Technology encourages us to experience as much as possible as quickly as possible.

Exploring areas close to your home might not seem as rewarding as flying half way around the world to climb a famous mountain, but first impressions can be deceiving.

The picture above and to the left is what I consider my home waters. It happens to be about a five minute paddle from my dock. The water is part of the White Oak River, and I spend a fair amount of my time there either in an outboard powered skiff or my kayak.

While the surface looks smooth, what's below that surface is anything but smooth. Large oyster rocks (piles of oyster shells) can be just beneath the surface. The depth of the river can be anything from a few inches to over twenty feet. In the area where I paddle the most, the river is about a mile and one half wide. Ten minutes by power boat from there, the river is less than fifty feet wide. Then minutes in the other direction and the river joins Bogue Sound and not far from there the Atlantic Ocean. Of course there are also tides and winds to confound a boater.

In fact just to safely navigate the White Oak River, it is recommended that you stay in a marked channel. Sometimes the wind can blow much of the water out of the river. Even in the channel there will be places with only three or four feet of water.

Still Exploring the river is a lot of fun. Maybe in a few years, I will grow bored with the White Oak, but right now I am enjoying learning the river in detail.

The river can be a source of great peace. It can also bring storm surges and heavy waves. It can be a quiet as a pond as in my slide show, Mackerel Morning.

There are days that I push the throttle all the way forward and zoom down the White Oak to Bogue Inlet, but there are also times like today when we throw out the anchor less than five minutes from home.

Learning the river and catching its fishes have become dual passions of mine. It is fun exploring, and since there is no guide book, you have to figure it out on your own.

There is a certain amount of satisfaction in doing that. I might just be the person to write up the history of the White Oak.
Posted by Ocracokewaves at 5:21 PM No comments: 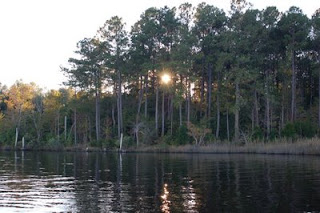 A little adventure never hurts. That would especially be true when you spent Sunday afternoon in a very quiet real estate office.

Before I left for work, my wife and I decided that we had to get outside on such a beautiful day.

I suggested that we ride up the White Oak River which happens to be the river in our back yard.

She quickly agreed once she learned that any fishing would only be done in an emergency which would be defined as they are almost jumping in the boat.

Besides getting out on the water on a beautiful day, I wanted to check to see where people were fishing. Riding around and watching is a great way to find some new waters to fish.

I made it home after work by twenty minutes after five, and it took us about ten minutes to prepare our skiff and drop it in the water from the lift behind our home.

We have actually been up the river a couple of times, but at those times I was still focused on learning how to boat. Now I am comfortable enough with the boat that I can enjoy where I am going without worrying about what to do next.

We slowly went out Raymond's Gut from Bluewater Cove which is located at Hancock Point. I quickly got the boat on plane, and we headed up river.

There are only a few more channel markers after Hancock Point, but I had the advantage of our GPS system which had recorded a few fishing expeditions that I had enjoyed the previous week with my fishing buddies.

Once you are past the last channel markers and headed north on the White Oak River, mostly you are fine in the middle of the river as long as you avoid the crab pots and watch for white PVC poles which mark some oyster reefs. The river is about four feet deep at high tide in most places.

The river going north is much less complex than it is south of Hancock Point where the channel is marked all the way to Swansboro. In the section from Hancock Point to Swansboro, there are many oyster reefs which can do serious damage to your boat if you stray from the channel and do not know what you are doing.

It took less than ten minutes before Hadnot Creek and White Oak Bluffs came into sight. In just a couple more minutes I impressed my wife by going full speed through a narrow opening in the marshes. Of course I had watched others do it and had checked it out with my depth finder earlier in the week.

After that we could see River Oaks Plantation subdivision on the right. Then the White Oak began to narrow and deepen. As I slowed up, my depth finder zoomed from four feet to sixteen feet.

No long after that the river rapidly narrowed to around one hundred feet wide. Considering the White Oak is close to a mile and one half wide at Hancock Point that is big change.

As the river narrowed it also gave up being a straight river and began doubling back upon itself.

We managed to make it to the southern side of what I like to call the Stella "fishtail" which you can see from this Google Map link.

Across the flat marshlands we could see the railroad trestle and the few buildings of Stella. We could have gone a little farther and perhaps turned around at Boondocks which is a paid access point and boat ramp just on the other side of the Stella Road bridge just north of the railroad trestle.

However, the sun was getting down in the sky, and the prospects of navigating the White Oak in the dark kept me on the cautious side of adventure. The old floats that are on the multitude of crab pots are a much harder to spot in dwindling light so we turned around and headed home.

We got the boat on the lift about six thirty. By the time we carried the gear to the garage and got in the house, the sky was turning golden, and the sun was getting near the horizon.

Our little one hour trip up the river was great fun. I am looking forward to going back when we have more time. October is the best month of the year for exploring.

I posted a few slides on the web of our trip.
Posted by Ocracokewaves at 9:06 AM No comments: