A perfect beach day is always around the corner 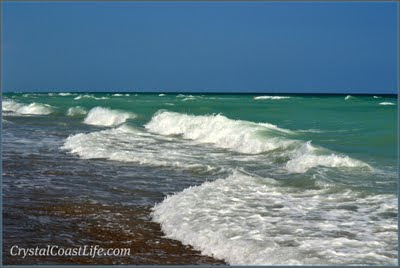 Few people on the east coast would disagree with the statement that "This has been a hot summer."  There are also plenty of folks in the southwest that are still being slowly baked.  The middle of August uncharacteristically has turned out to be a lucky time to be on North Carolina's Southern Outer Banks.  August certainly doesn't have a history of being a time when we have our most pleasant weather.

However, the one thing about living at the beach is that you get to hang around until the weather turns perfect for a beach trip even if it is in the middle of August.

July 2011 was the hottest July that we have seen in our five years of living in the Crystal Coast portion of North Carolina's Southern Outer Banks.  The Crystal Coast is often defined as the area in Carteret County from Emerald Isle to Atlantic Beach sometimes including Beaufort.  For all practical purposes, the area runs from Swansboro in Onslow County to the east to Beaufort in Carteret County.

Usually in our little piece of paradise, July can be a relatively pleasant month.  Sometimes we have have our windows open at night and in the morning through early July.  This year things warmed up quickly, and the heat was almost inescapable except for a few nights in July when we were able to have our windows open.

The heat of the 2011 season has been compounded by a stubborn drought which started in early May and is still clinging to the area.  With the drought came some wildfires which were started by lightning in some large natural preserves.  Three have been three of those this summer, and we have had some days when we needed to escape the smoke.  You know it is dry when the swamps are catching on fire.

Since we live near the beach, we go to the beach a lot especially to escape the heat.  This spring, I walked all the beaches within the town limits of Emerald Isle at least three times.  That is a lot of beach walking. I am approaching 100 miles of beach walking for the season.  It is not unusual for me to go for a noon beach walk over on the beautiful sand at the Point. However, when the heat is on, even I avoid the beaches.

In July 2011 and the early part of August hotter than normal temperature that kept me away from the beach more than I like.  Even our evenings were warm, and the area waters heated up so quickly that there was little relief from the day's heat even at night.  It was still more pleasant at the beach, it just wasn't pleasant enough to lure me out regularly.

So when the middle of August 2011 rolled around and our high temperatures dropped to the upper eighties from the low nineties,  and we had some lows in the sixties, I knew it was time to get back to the beaches.

I boat several times a week during the summer, so I am acutely aware of the winds. I will often take our skiff down to the marshes on the other side of the Intracoastal Waterway at Swansboro.  It is a good way to know what the water temperature is doing and how the winds are blowing.

On August 16, my morning boat ride told me that the White Oak River had cooled to slightly under 80F which was a drop of almost eight degrees in a week.  I also found some steady winds from the north.  In my mind, that along with the day's beautiful blue skies, set up the possibility of nearly perfect beach conditions.

We had some errands to run early in the afternoon which was fine since low tide wasn't until 4 PM.  I enjoy the beach on a falling tide or even right at low tide.  It is the best time for a beach walk.  It didn't take us long to finish our chores, and head across the bridge to the beaches of Emerald Isle.

This time of year when some of the larger beach areas can be crowded, it doesn't take much to convince me to drive east along the beach for a few miles.  Somewhere just before mile marker 12.5 we usually turn right off of Emerald Drive and then left onto Ocean Drive until we get to Third Street Beach.  It is one of our favorites.  It is rarely crowed, and there is a nice picnic table with platform where my wife can relax if she doesn't want to get her feet wet.

I almost always want to get my feet wet, and August 16 was no exception.  While I didn't go on one of my long beach walks, I did stand knee deep in the surf and enjoy what I thought was nearly perfect water with just the right amount of breeze under a wonderful blue sky.  There was just enough heat in the air to make the water pleasant.  August 16 was a perfect beach day, and I am glad that I knew enough to head over to the beaches and grab a taste of it.   This is a YouTube video that I made while standing in the surf.

I am hoping it is just the first of many this season since we are headed slowly but surely towards fall which is often the best time to come to the beach.

Posted by Ocracokewaves at 4:39 AM No comments: