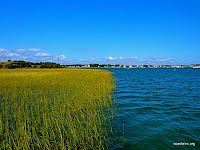 I have been a fisherman since I was old enough to hold a pole. That has been a very long time, and I have learned much about fishing and life over the course of my life long love affair with the sport.

I have fished for native brook trout in Canada and for Grayling in Alaska, but mostly I have fished the state of North Carolina from the mountains to Cape Hatteras.

There is one golden rule that I have learned with fishing. You will never catch any fish unless you put a line in the water. You cannot catch fish by standing on the edge of the water and just looking at the water.

It occurred to me this afternoon that fishing is a lot like social networking. In social networking you have these rivers of information like Twitter or great pools of fish like Facebook. It is unlikely that someone can stand up in front of you and really get across the essence of social networking.

The opportunity that social network offers has to be balanced against the challenges that it places on information gathering and decision making.

Social networking is a logical expression of the changes that have happened to our society. Fifty years ago when I was growing up in the small town of Lewisville, North Carolina, there was no need for social networking. We were a small town world. While there was some mobility in our towns, but it was nothing like what we have seen since the turn of the century. People were born in a community and often died there.

You met people at church, at school, at work, or someone introduced you to them. Ancestors from our family had lived within twenty or thirty miles of where I grew up since not long after the revolutionary war. We lived on a street named after our family not far from another road named for the ferry my great grandfather used to run.

There are not many people who have the luxury of growing up in an environment like that these days. Jobs take people all over the country if not the world. Children are lucky if they start school in the same town as where they were born.

In the days before the Internet, if you wanted information you mostly wrote letters, and you had to judge the person on the other end by the quality of the letter you received in return. Telephone calls could be very expensive even if you were able to figure out the right person to call.

In 1971, I ended up buying an old farm in Canada. While the project started with letters to a real estate agent, it eventually required a couple of trips to personally evaluate the agent and the land. What I found out about the area came from books and visiting the area. There was no Internet for research. In the end the decision was mine based on what I had learned the hard way. There was no supporting cast of people in the area to tell me that the North Mountain of Nova Scotia's Annapolis Valley was a good place. I had to take a gamble.

Actually I am not certain that the purchase that I made in 1971 would be as easy today. Nowadays there is always a risk that your decision making can end up overwhelmed by too many opinions and too much information. In 1971 too much information was not a problem.

Distant corporations email, online forums, and instant messaging loosened some of the bonds that made the person next to you less important than the person 3,000 miles away with whom you exchanged messages.

Then there is the whole generational issue where many younger workers communicate more with their friends than their colleagues. It is pretty easy for this to become a distraction at work so it comes as no surprise that social networking starts with something of black eye in most corporate circles.

In that we find the most interesting paradox, those companies which could benefit most from social networking often show great resistance.

If you look at the marsh and the waters in the picture accompanying this post, most people would understand that there is very complex web of life at the boundary between the marshes and open water. The afternoon we fished there, we caught a wide variety of fish in that one spot.

Had we not taken the time to anchor and fish there, any speculation as to what might be there would have just been speculation. We fished there, now we know what to expect the next time.

Social networking done right can provide a tremendous amount of information about market trends and customer preferences. Becoming part of a social network interested in your products or services is like being part of the largest customer focus group possible.

On top of customer information, social networking can also be an amazing learning opportunity. You can see first hand how people respond to certain messages. It is the ultimate testbed for marketing campaigns.

Even just watching the information flow on Twitter is like sticking your hand in a river and understanding the currents.

Certainly every business hoping to grow should have an active social networking strategy.
Posted by Ocracokewaves at 1:48 PM No comments: