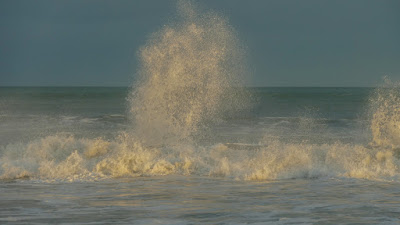 I had the good fortune to work at Apple for almost twenty years, but anyone who worked there for a few years would likely tell you that Apple was more like a religion than a company.  The company and its supporters have been called a cult.  While Apple and its cheerleaders do not deserve all the blame for spreading cult-like behavior through our society, they are not innocent either.  Ignoring the dangers of this behavior at any level of government puts out society at great risk.

If you do a Google search for "the cult of Apple," you will be surprised to find several articles on the subject including this one, "5 signs that Apple is a cult," from The Week Magazine.  While The Week article is over five years old, there is a Forbes one, The Cult Of Apple And The Church Of Cook, barely a couple of years old.

This quote is from Eight Marks of a cult by Randall Waters.


"The world is depicted as black and white, with little room for making personal decisions based on a trained conscience. One’s conduct is modeled after the ideology of the group, as taught in its literature. People and organizations are pictured as either good or evil, depending on their relationship to the cult."

As someone who was inside Apple for almost two decades, it would be hard to deny the black and white nature of Apple.  People were either for or against Apple.  There was no middle ground and that made it very hard  for customers who lived in the real world instead of the insanely pure world created by Steve Jobs in Cupertino.

The farther you were from Cupertino, the harder it was to live the pure ideology of Apple.  There were times that Apple was paralyzed internally because Steve would not make a decision and no one was brave enough to make a decision that Steve might overturn.

Those of us in Apple sales learned to dread finding a group of Apple fanatics at an account almost as much as a finding a Windows-leaning director of information technology.  Our Apple customers sometimes overwhelmed with enthusiasm for Apple's products could become so pushy that they would destroy any opportunity to work with an account.

Living in a cult is hard but it is a totally different thing if you leave. Once you are out of the cult, the cult always turns on you.  For years after leaving the company I wrote about Apple. I learned that Apple fans would accept no criticism of their precious products or Steve.  Apple fanatics would vilify you for complaining that iPhoto and Apple's Cloud solution were getting worse not better. Fans were especially vehement when I complained about the poor placement on the SD slot reader on the late 2010 iMac. It seemed to me that placing the SD slot on the same side just a quarter of an inch below the DVD reader was asking for SD cards to fall into the DVD reader.

In typical Apple fashion, the problem was solved by eliminating SD card readers and internal DVD drives. iPhoto and its functionality also disappeared and I suspect there is no one inside or outside of Apple that can really explain Apple's cloud strategy.

It turns out that having a cult is poor way of getting product feedback. If every product is great, why take the time make it even better by asking real customers. You end up touting as "Genius" barely useful functionality like the MacBook Pro's touchbar.  I will never forget  product engineering telling us that Intel would never get its next generation chips after the Pentium into laptops because the chips ran too hot.  Unfortunately when you are inside the cult, you end up believing your own propaganda.

Maybe that is why my years-ago prediction that Apple could never sustain a ten percent market share has turned out to be true.  Recent numbers show Apple's PC sales losing market share.  Even Tim Cook admits that just Windows 10 is four times more popular than the Mac OS.

It used to be if I wrote a comment about Apple's market share, I would have to defend my honor as a human being.  Even the slightest suggestion that Apple might be making a mistake would bring a character attack. The comment always came back that Apple was  making more money than others. I even had Apple customers suggest that Apple should raise prices even higher. It was not useful to point out that overcharging customers for the same components as used in Windows computers is not a customer benefit.  You can read more than you want to know about Apple at my Applepeels site or even better check out my Kindle book, The Pomme Company.

Unfortunately Apple's cult style of leadership seems to have spread because it fits the mood of our country. From the national to the local level, personality politics seem to be the rule.  The idea that there might be a middle ground is inconceivable to the cheerleaders behind today's cult-like  leaders.  Any idea that is not theirs is toxic and any kind of behavior from their leader is not only acceptable but encouraged. Even a neighborhood leader who has attained cult-like status can do no wrong in the eyes of his or her supporters and cheerleaders.

While the diminished spirit of Steve Jobs lives on in the less-than-leading edge Mac products that Apple continues to pedal at exorbitant prices, the principles of his cult-like leadership have infected our body politic.  The worship of leaders no matter what their behavior or level of incompetence is rampant from neighborhoods to national parties.  It is not going to work any better for us than it did for Apple in computer market share.

Apple better hope the iPhone never falters because it has lost many core markets including education. The rest of us have lost the opportunity for compromise, civility, and mutual success.  Steve would be proud, he was never much for being nice.


Posted by Ocracokewaves at 8:41 PM No comments: