Enduring the storms of life 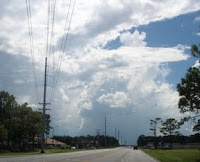 There are plenty of storms here on the Crystal Coast during the summer months. You can almost count on a thunderstorm each afternoon.

Sometimes they come during the night. Last week we had one so intense in the middle of the night that you could read a book by the lightning.

Still thunderstorms eventually stop, the rain tapers off, and they move on.

Unfortunately human relations aren't so predictable especially when it comes to partnerships.

I got involved in my first partnership when I was just over twenty-one, it ended badly. The last time I tried to speak to my former partner, he would only grunt at me. The worst thing was that he wouldn't even tell me what I had done to make him so mad.

This was a guy who came to the partnership with only sweat equity. I had the money, we both worked hard, and we shared the results equally. I thought we were pretty good friends. I gave him the money for his wife's wedding ring.

When he wanted to buy me out, I only charged him what I paid for the property plus an agreed upon percent increase on what I paid. It was a reasonable price for very good coastal property.

Still he, like almost every partner, ended up feeling like he got the short end of the deal.

I guess if he was going to be mad at me anyway, I should have asked for the money I gave him for the wedding ring, but I just let it ride since I felt that would be rubbing salt into his wounds.

I think the fundamental problem with partnerships is that two people can say the same thing and each hear something completely different.

Not quite a year ago we got into another partnership. I didn't go looking for the partnership. I was actually headed in another direction when it found me. I knew it would fail as almost all partnerships do. Why did I agree to it?

I think at my core, I am fundamentally an optimist. I want to think the best about people.

Also I though maybe if I bent over far enough on this partnership, that it just might work.

This time we started with equal money, then I put lots more in and then we both put more in. I did all the work and got most of the benefit since the state reason for my partner's involvement was a long term investment and a place to have fun for a couple of weeks a year.

My new rule is the farther I bend, the quicker the partnership ends. I went to a lot of expense to make sure this partner got out with no monetary loses. Unfortunately I can't say the same for myself. You would think making sure that they lost no money would at least get a thank you, but I don't think I will hold my breath. Not losing money didn't fix the broken friendship.

At this point in my life, that's probably the last partnership that I will attempt.

Written agreements don't help either. I think the net of it is that all partnerhships are doomed to fail.

Partnerships end up being a long lasting way to mess up friendships.
Posted by Ocracokewaves at 7:20 PM No comments: