Close to the weather and even closer to reality 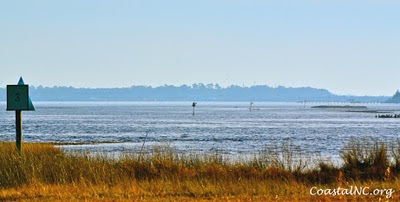 It is something of a local sport listening to weather reports and guessing how long it will take them to catch up with the reality of the local weather.

Living along the coast in the middle of a string of small towns is a lot different than living in a compact urban area under the microscope of a number of weathermen.  Urban areas like Northern Virgina, Washington, and Baltimore are only a fraction the size of the coastal area that our weathermen deal with when trying to come up with a forecast.

Carteret County would be about half the area of the combined Washington-Baltimore metropolitan area.  The problem is that the weathermen looking after our area cover about fifteen counties of which we are only one.  Our closest weatherman is three counties away and pretty far inland.

On top of that our weather changes radically depending on where you are in relation to the water.  Then there is the little fact that weather systems can form or intensify off our coast.  So how many times have you heard the phrase "a low will form off the North Carolina coast?"  That would be our area.

Friday morning, February 11, we got a second dose of seeing how difficult it is to come with an accurate forecast in an area as complex and large as coastal North Carolina.

When we listed to the forecast on Thursday night at 11 PM, we were told to expect a few morning showers followed by clearing in the afternoon with a high temperature of around 50F.

Friday morning we even heard the same forecast which was strange since I awoke to blue skies.  Unfortunately the blue skies did not last very long.  Before nine AM, we were seeing rain showers which not only did not stop but continued until almost ten PM Friday.  On top of that our temperatures never got out of the upper thirties much less to 50F.

I would class that as a miss almost as big as our last "snow storm" when we were supposed to get maybe an inch, and we ended up with four to seven inches of snow.

Of course I don't blame the weathermen, it is just difficult to try to guess the weather in a large complex area intermingled with so much water.  All it takes is a system moving two or three miles closer to the coast, and our weather is totally different than the weather just a few miles inland.

What happens is that residents stay close to the weather forecasts, but they also have to use some common sense.  It you see a line of storms on the horizon, you pay attention to them even if there are no storms in the forecast.

It is not a bad way to live, much of what we hear and see on the television and Internet could use a little more fact checking just like we give our weather forecasts.
Posted by Ocracokewaves at 5:38 AM No comments: