High water at the dock 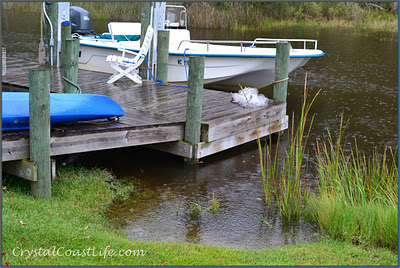 The more that the out of doors is part of your life, the more attention that you pay to the weather.   Yet each place you live usually requires paying attention to different things.

Not many in this generation of Americans have the experience of spending most of their lives in one area.  I have some family members who are living within ten miles of where their grandfather and great grandfather were living in 1910.  I have some friends in Canada living in a settlement not far from where their families first put down roots in the late eighteen hundreds.

I never got the chance to walk the banks of the long-gone millpond where my mother grew up with her family.  My grandfather and the millpond were gone before I had a chance to learn about them, but I did get to visit the site of the old dam once.  I still remember the walk through the woods.

I can imagine that if you were living on a millpond, dependent on water flow in a small stream, when and how much it rained would have been very important.  However, the first public weather forecasts did not show up until 1925.  My mother and the family had moved away from the millpond by then.

The early years of my own life showed a strong taste for wanderlust.  I moved to Saint Croix Cove on the shore of the Bay of Fundy in Nova Scotia, and only marriage stopped me from giving Newfoundland a try.  When we lived in Nova Scotia one of the most important things in the weather during the summer was fog.   A partner and I were trying to farm with a few cattle.  Making hay in the "summer" was how we got feed for the cattle in the winter.

We lived on the north mountain of the Annapolis Valley.  The mountain sloped rapidly down to the Bay of Fundy.  The scenic beauty of the area and the charm of the old farm were undeniable.  Yet the almost inevitable fog during the summer made it really hard to make good quality hay.  As so often has been the case in my life, there was no real local weather forecast.  The only way to figure out the fog was to become a keen observer of the signs which were often followed by fog.

We eventually moved to just north of Fredericton, New Brunswick.  We happened to end up in Tay Creek, which was known locally as a "snow belt."  Our first year there, I measured twenty-three feet of snow.  Once again it did not take long to figure out that the only real local forecasts would have to come from us.  Fredericton, which is the capital of New Brunswick was twenty miles away and much lower in elevation.  I came to learn that Fredericton could easily be eight degrees Fahrenheit warmer than Tay Creek.  In a Maritime climate that makes a huge difference in how much snow you receive.

As we went through our city phase, living in Halifax, Nova Scotia, Columbia, MD and eventually Roanoke, Virginia, it was easier to find forecasts that matched reality until we moved to Roanoke where we ended up living on a high mountain above the city.  Sometimes the weathermen would call for rain, and we clearly got snow.  While living on the mountain was great for getting beautiful sunrises, it made getting an accurate weather forecast challenging.   Once again, we had to learn how to watch the signs and predict our own weather.  Fog also came back into our life.  There were mornings when the fog made the rest of the world invisible.


Now that we are living on the North Carolina coast, I think we might be in the most complex weather area of our lives.  While we have a number of reporting weather stations very close by, it is rare that they can accurately forecast our weather.  When I see a long-range forecast I just chuckle knowing that the odds of it being right are very slim.

Yet here at the coast, the weather is a huge part of our lives.  We have to get ready for events like Hurricane Irene, and often what we are hearing from the weathermen is more focused on other areas than our spot just off the White Oak River.  When Irene visited, I took to issuing my own forecasts to a number of neighbors.  It was helpful to me and them.  Things are a lot different than in the days of the millpond.  Much of the information needed for a forecast is there, you just have to know where to look and how to interpret it.

It is October 11, and for days we have been hearing about a tropical low that forecasters were guessing would dump up to three inches of rain on our area.  Three inches of rain doesn't mean a lot to our area which has seen some extreme precipitation over the years.  However, the forecasters were also calling for high winds and tides.  I knew to watch the morning tide to see if I needed to raise my boat a few inches.  Sure enough, at about 11 AM, I had to raise my boat a little.  However, so far the rain total is only eleven-hundredths of an inch at 1 PM and the sky is significantly lighter than when we got up this morning.  I suspect that my feeling that most of the rain was going to miss us is going to play out accurately.

Snow, heavy rain, and fog might not be problems here, but high water and winds can make us pay close attention to the weather.  The attention we pay is not much different I suspect than how my grandfather watched for rains around the millpond.  I would love to know if he got some great weather suitable for bottling just like we have recently seen.
Posted by Ocracokewaves at 10:09 AM No comments: