Winter at the Beach 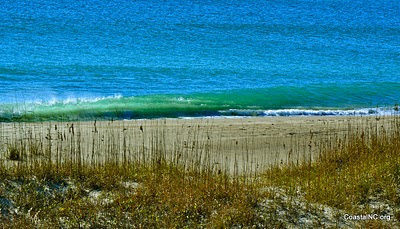 While winter is not the most desirable time to visit the beach, there are still things to do and beautiful scenery to enjoy.  Sometimes finding a good day for a beach walk becomes something of  a challenge, but there are times that Mother Nature will smile upon you.

You can luck into some great winter beach weather.  The winter of 2008, I kept track of temperatures during the month of January.  We only had 19 hours below freezing for the whole month, and we managed 11 days when we hit 70 degrees or better.

While I did not keep track during January 2010, I know it was much colder. Every year has it cold spells and warm times on the beach.  The temperature reached 75F on February 9, 2009. It prompted me to write an article about the great weather.

That day was just a couple weeks after a late January dusting of snow along the beach.  Winter time at the beach is actually a huge war between warm and cold air masses. You never quite know which one is going to win.

While in the late fall, we often have the benefit of warm waters to protect us from the cold.  By the middle of December, our area waters are cooling off just at the time Canadian air masses often invade the US.

This year, the whole east coast has endured early cold weather that is much colder than normal.  Normal December temperatures for the Crystal Coast in December are 58F for the high and 35F for the low.  The first week of December 2010 we saw a couple of days when our high temperature barely made it to 35F.

We have seen a year when we did not have a day when the high temperature was lower than 40F.

Considering parts of Maritime Canada were higher than ours last week, the weather the first week of December was a little upside down.

We have not let the cold weather get us down.  With a gas fireplace, it takes only a few minutes to warm up a home to the point of it being very toasty.  The cold weather is always a great time to get a bowl of stuffed pepper soup from Mike's on the Island or some of the delicious chowder at Nicky's of Swansboro.  One day last week, we had a great bowl of vegetable beef soup from Yana Mama's in Swansboro.

Even during this most recent period of cold weather, we have had plenty of sunshine.  With the power of the Carolina sun, all you have to do is find a spot out of the wind, and you will likely find some heat.

Even this week, I managed to stop at one of the many beach accesses and take a few pictures of the waves to go along with the ones that I had of the icy gut behind our home .

I had planned to do more than take pictures this weekend, but rain fell all day Saturday, December 11, and we are supposed to have showers all day Sunday.  Our Sunday temperature of 61F likely would normally tempt me to run down the river in my boat, but a boat ride in the rain at 61F is not very appealing even at the beach.

Still there are things to do besides boat rides. This is a great time of year to watch some of the birds.  Today we had a great blue heron fishing in the gut behind our house.  He was very successful.  I think he managed four fish in just a couple of minutes.  When the rain stops, and we get some warmer days, it will be a great time to hit area trails.

People often fail to consider some of the wonderful indoor activities that are always available here along the Southern Outer Banks.  Three of the most popular are the Maritime Museum at Beaufort, the Aquarium at Pine Knoll Shores, and the Core Sound Museum on Harkers' Island.

So while it might not be a great time for a beach walk, a boat ride, or some fishing, winter is still not a bad time to visit the beach.  There is plenty of easily accessible scenery.  Most of our businesses and restaurants are still open, and you certainly won't have to wait in line.  Even our department stores are not as crowded as you would find in a large city.  We recently had visitors who did much of their Christmas shopping in Morehead City.

When you come to the beach in the winter, there is no question the weather is a gamble, but it is highly unlikely that you will run into a blizzard, and you might just luck into one of those 75F days.  A few of those and winter seems a lot shorter.
Posted by Ocracokewaves at 11:44 PM No comments: