The importance of small things 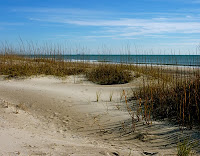 As I walked onto the beach today, I noticed how far out the ocean happened to be. It was also apparent that the slope of the beach had changed slightly since I last visited a couple weeks ago.

Just as I was about to descend to the beach, I looked behind the beach grass line and saw three or four fairly new sprouts of grass advancing into some sand on the backside of the dune.

It dawned on me how important those new sprouts might be some day. If the waves are driven over the dunes, and there is no grass there, it will be easy to lose that sand. If grass is anchoring it, then it will be much more likely to stay.

On a beach it is pretty easy to get overwhelmed by the big picture of sky and water and forget about the small things.

Often in dealing with a group of people it is far too easy to forget the individuals. We used to have some "friends' who we would run into back in the day when we were members of the local country club. We had joined so our kids and I could have a place to swim. These friends would often strike up a conversation with you, but if someone walked by whom they viewed as more important, you would be dropped like a hot potato. It was not exactly a great way to build a friendship. I have had managers who would be talking to you, and completely stop in mid sentence if an executive wandered nearby. I had to wonder where their heads were.

We had our real estate sales group holiday brunch this morning. Real estate as most people know is a tough business right now, so our last two parties have been potluck events which is fine with me since the group has some great cooks.

I have worked with a number of different companies, a very big one, Apple, and some at the other end of the spectrum. Apple was a place where there was very little effort expended making people feel welcome. The general idea was that you were lucky to be working at Apple so don't count on any warm and fuzzies. While I had some great friends and wonderful moments with the team that worked for me at Apple, beyond my immediate manager that I had for several years, there were few who made you feel really welcome.

Apple is stark contrast to the group of people I work with today. There are some very talented individuals in today's group, and some people that I value as friends. As I walked into the room for our party this morning, I saw an area associate that I had briefly worked with in another office. We talked for a moment, and then each of us wandered off talking to some others. Our group is heavily weighted toward the ladies. I think there were six of us guys there today and about eighteen ladies.

I have been with some of the people in the group for three years, and I can say without a doubt that I feel welcome and a part of the group. A lot of faces have changed over the years, and no one is having it particularly easy. The president of the company sat down beside me for a few minutes before he had to leave. There was no bitterness in his assessment of the state of the market or the company. He could have blamed his real estate agents for not bringing in enough business, but he has the business intelligence to know that we are not the ones at fault.

In fact I got the feeling that he was proud of those of us who were making personal sacrifices to hang on through a tough market. None of us have made very much money, and in fact most of us have never worked harder for so little money.

There are some little things in this whole scenario that are worth mentioning. First of all at Apple, area associates, were never considered part of the sales team. In spite of much lobbying from their managers, the corporation thought they had little value in the sales process.

In our world of real estate, it is completely different. The administrative people are considered the first people to touch the customer and as such are valued greatly for their ability to engage the customer and quickly direct the customer to the right person. It might seem like a small thing, but its importance is huge. We do not hide behind impersonal telephone trees.

Another small thing is some balance when evaluating performance. At Apple and some places I have worked. Market conditions did not matter. Whatever performance goal was thrown at you was expected to be met even if it was impossible. In fact you could be doing exceptionally well in growing your business far over the industry or company average and still lose your job.

At Apple, you could miss your number because the company could not deliver product in time, and it was still your fault.

Both Apple and one of the other companies where I worked really cared more that you did not rock the boat than they did about how good you were at doing your job. If you could stand back and look at both companies, you would wonder why management and sales were at odds with each other. I actually had one high level executive tell me that the only way to get anything out of sales people was to threaten to take something from them.

While the idea that management and sales are in the same boat might seem like a small thing, it also turns out to be a hugely important thing if you want to build companies where people enjoy working and give it their best over time. I remember when times got tough at Apple, they had to start throwing bonuses at people to keep them from leaving. Given the current management style at Apple, I wonder how many people would hang around if things were no so rosy in Cupertino. Loyalty might be an outdated concept in most of the business world, but I have to wonder what we have lost in jettisoning it?

I like to think living here on the Crystal Coast gives us a chance to be a little different since we live in place where the scenery often soothes your soul. Perhaps it is harder for people in pressure cooker metro areas to see these small things, but they certainly can make a huge difference in people's lives.
Posted by Ocracokewaves at 7:25 PM 1 comment: