The joy of discovery 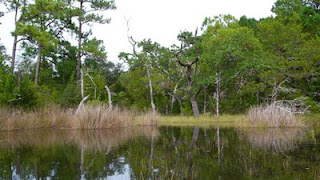 I have been lucky to have been in a number of places that inspire the imagination. Those were places where the landscape can dwarf your ideas.

I can still remember the first time that I saw the Newfoundland barrens from the air. It was a wilderness that seemed never to end.

Now that I am shoehorned into a lot in a very special subdivision, it is hard to stand on hill and see nothing but trees. However, it is even more special to paddle around the corner and visit a pond that had been inaccessible.

This afternoon it did not take a lot of NFL football to get me thinking about doing something outside even with the clouds that had taken away our morning blue sky.

Sometimes I think living in Carteret County creates an addiction to blue sky. We have it so often, that it becomes part of consciousness. When it is not there, we miss it. The good news is that it is there more often than not. A day like today where the sky starts blue and turns cloudy throws me for a little loop.

But I managed to get myself motivated and in my kayak in mid-afternoon. We had a very high tide. It was probably the highest that I have seen while actually on the water paddling my kayak.

When I turned the corner to head out to the White Oak River, I noticed the high water had made accessible a pond where I have often seen Herons. In fact just before I started paddling towards the pond I noticed a Great Blue Heron and a White Heron in the old tree at the back of the pond.

As soon as they saw me heading their way, they moved to another tree across the gut while I explored the pond area.

There's something special about finding and exploring a neat spot like the flooded pond. I have paddled the area for two years and never suspected that the water might get high enough to let me paddle into the pond.

It is even more fun when the hidden area is just around the corner from your home.

I did not stay very long since the idea of dragging my kayak out of there over mud did not appeal to me. I moved on before the high tide started to disappear.

My trip out into the river was an easy one with the wind behind me. I managed to fish a little, but mostly I enjoyed the solitude of the river. Only two power boats came by in the couple of hours that I was out there.

I did catch one fish which was barely as big as the Gotcha lure that I was using. Still it was nice to know that the lure was capable of attracting fish.

I have found some pretty neat spots hiking in the mountains behind our home in Roanoke,Va. On our farm in Canada I can still remember finding a wonderful spring which the previous owner of our farm had mentioned to me. It was such a neat spot that I carried a Sierra Cup back into the woods and left it hanging there for anyone that happened upon the cool waters which flowed so strongly that you could see the steam from it in the woods even with four feet of snow on the ground.

I suspect I will remember this day that the tide was high enough to let me visit the Heron's home pond. It was a special visit where I got to see our inlet from a different perspective. It just shows you that adventure can just be around the corner.

I posted a few pictures of my trip which lets you join me on my visit.
Posted by Ocracokewaves at 7:19 PM