The wrong way to stand out 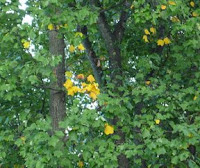 It is okay for a an early turning fall leaf to stand out.

There is nothing wrong with standing up for something that is right. It is even fine to be standing alone.

Our country has made mistakes before, but we have always stood for what is right. That has been the American way.

Using fear to manipulate the country, our leaders have shamefully abandoned the high ground.

The New York Times had this to say in an editorial.

President Bush and his aides have not only condoned torture and abuse at secret prisons, but they have conducted a systematic campaign to mislead Congress, the American people and the world about those policies.

PRESIDENT BUSH said Friday, as he has many times before, that "this government does not torture people." But presidential declarations can't change the facts. The record shows that Mr. Bush and a compliant Justice Department have repeatedly authorized the CIA to use interrogation methods that the rest of the world -- and every U.S. administration before this one -- have regarded as torture: techniques such as simulated drowning, induced hypothermia, sleep deprivation and prolonged standing.

It is hard to understand how a people so well off can completely lose their courage and condone torture only to have a false sense of security.

I am at a loss to explain this whole idea that the ends justify the means. Most of us long ago figured out that doing a bad thing to make a good thing happen just doesn't work.

It corrupts you. There is no satisfaction in being safe if we have become evil to achieve our safety.

I can only hope that we will reject all the politicians who have made America the home of torture. Using torture only confirms what our enemies are saying about us. We prove them right when we descend to torture.

To do otherwise is to dishonor the history of our country and the many who died to protect the ideas on which America was built.

Posted by Ocracokewaves at 7:26 PM