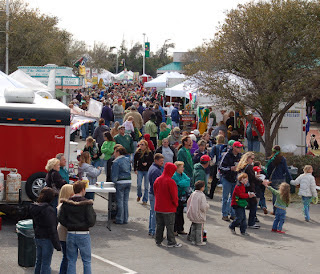 The Emerald Isle Saint Patrick's Day Festival promised to be my first taste of a local festival. With the water warming, temperatures showing some promise and even some Bradford Pears starting to bloom, I was a little worried when the Saturday of the event turned out to coincide with the arrival of yet another taste of cooler Canadian air. Fortunately the cooler temperatures did little to cool the enthusiasm of the crowds. As I swung onto Emerald Drive from the bridge, it was not long before I saw cars parked everywhere along Emerald Isle's main drag.

The main event was hosted in the parking lot of Emerald Plantation Shopping Center by Food Lion. I was impressed by how many vendors could be placed in and around the shopping center. There were a number of craft booths, displaying several types of artwork including herons, fish, both painted wooden. Then there were booths with handicrafts such as hand bags, book marks, candles and clothing. There was even a table of homemade preserves. The Emerald Isle Fire and EMS Departments were there along with groups as varied as Angels for Animals and the Emerald Isle Parrot Head Club.

The kids had plenty there to entertain them, including rides and face painting. I saw a few folks with green hair and even one person who appeared to have painted all his exposed skin green. I did not see any blue skin from the somewhat chilly temperatures or people on the climbing wall. I did see a few folks warming their hands around some portable outdoor heaters, but most people seemed to ignore the weather and were having a great time.

The Budwiser Beer Tent appeared to be packed. There was live music and music from one of the radio stations. The music certainly added a festive air to the event.

Then there were the food tents and carts which had offerings ranging from Collard Sandwiches to almost every type of festival food that there is, including ribbon fries and funnel cakes. I was trying to stay away from the food so I could be prepared for the later in the day Oyster Roast in Swansboro so I ended up just taking home a pound of barbecue. It turned out to particularly delicious barbecue which I had watched them hand chop and season at the booth. Unfortunately the wind was blowing when I snapped a picture of the booth. It folded the sign so I will have to go another year guessing who made the barbecue which turned out to some of the best that I have had since my youth.

It brought back memories of containers of barbecue that a friend, who was farmer in Kernersville, NC, used to bring us as samples from their yearly cook off during their spring horse show. The Emerald Isle Festival barbecue was nearly perfect with just the right mixture of crispy outer crust and lean meat mixed with a spicy vinegar based sauce. My congratulations to the anonymous King of the Barbecue.

My only regret is that I missed the Port City Pipes & Drums. I assume they must have played earlier and left or perhaps were taking a well deserved break in the beer tent when I visited.

I have posted pictures at http://coastalnc.org/saintpatricksday

I know one thing, I have to find the maker of that barbecue before next year.
Posted by Ocracokewaves at 1:22 PM

Lament no more! Port City Pipes & Drums will be returning to the Emerald Isle St. Patrick's Day Festival this year [2008]. We usually get there between 8 and 9 in the morning and begin the proccess of tuning up. We play every where at the festival, but end at the beer tent and leave by mid afternoon. For some reason the weather seems to always be windy and cold which shortens the playability of the reeds in the pipes. Other factors include: playing several hours in the cold weather is fatiguing; Beer on empty stomaches (full tummys and pipes don't mix) is draining; Long drive back to Wilmington; We have another gig later that night. Visit our website:

PS - I hope that doesn't across as a cheesy plug.

I had just said to my friend Jon, who had a cold, windy piping job at a funeral in NJ this past Monday, that I hoped you lads would be back.

I will make sure that I get to the festival early enough to hear you this year.

Perhaps we need to switch your libations from beer to Glenfiddich to keep you warm. Of course then we would have to drive you back to Wilmington.

By the way, I will plug a pipe band at any opportunity. Thanks for letting me know your schedule.

I will make sure I mention your schedule in a post before the event.

Single Malt is always welcome and thank you for the plug. I hope we won't dissappoint you. We had a solid perfomance during a multi-cultural concert at UNCW, but again we're subject to the elements at the festival -- We'll see.

I am presently in West Virginia visiting my mother and missed the Thursday night rehearsal. I spoke to Andy Simpson, our pipe major, this evening and he told me everyone was brushing up on their Irish tunes.

PS - It is customary that we carry flasks.