Learning to take the weather in stride 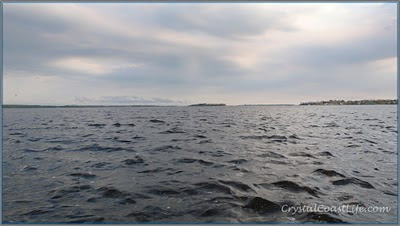 Most of the US has seen a pretty tough winter with temperatures colder than normal.  Here in Carteret County the rumor is that this was the coldest winter in the last 100 years.  For the most part the rivers did not freeze over, and our one big snow storm of four inches disappeared within hours of arriving without any shoveling.

However, our weather recently has been so nice that it has been easy to forget that we are in spring and that cooler weather is never far away.  Wednesday, March 23, was so nice that a friend and I managed to sneak in an early spring fishing trip.  Earlier in the month, I managed to explore all the new sand over at the Point at Emerald Isle.  A week later, I even managed a much longer walk on the beach.

All of this was accomplished in shorts and temperatures ranging from the upper sixties to the eighties.  It should not surprise anyone that we assumed that spring was here.  Even the plants got into the swing of things.  Our Bradford pear blooms only lasted a week.  The daffodils didn't last but a couple of weeks. Recently we have seen some tulips, wisteria, and even dogwood trees blooming.  I even put my tomato plants in the ground the same day that I went fishing.

The pelicans, great blue herons, and white herons that have been hanging around the water behind our home headed off for bigger waters.  There were a couple of days when the bluebirds were so noisy that I was sure that spring was entrenched here on the Southern Outer Banks.  Even the bait fish in Raymond's Gut which runs out to the White Oak River could hardly stay in the water.  They were swarming around our dock and jumping all over the water as I idled my boat out to the river.  I even wrote a post talking about figuring out the puzzle being near the water in Carteret County.

Mother Nature sent a warning shot across my bow on Thursday night.  I managed to go on my first White Oak River kayaking trip of the 2011 season.  It was late in the day when I left our dock, but the temperatures were in the upper seventies.  By the time I got back only a little over an hour later, the temperature had dropped to the middle fifties, and the water taken on an appearance not nearly so inviting.  The picture at the top of the post was taken about when I figured about that a front had just gone over me and taken away all of my warmth.

Still the next two days weren't so bad.  We managed to get into the upper sixties each day.  Then came Sunday, March 27.   It was a cold day with temperatures in the middle forties when we got out of bed.  They actually drifted downwards during the day to the low forties.  Areas to the north and west of the Crystal Coast haven't even made it into the forties.  Snow has been reported in West Virginia mountains, and the mountains in southwest Virginia and North Carolina are likely to get some snow during the evening of March 27.

It just goes to show you that you cannot count on the weather.  While it appeared spring was with us for good, we now have a slight bump in the road.    We will have to worry about those blooms on the strawberry plants and my tomato plants.    The cold temperatures stretch well into South Carolina and Georgia so we are not alone.  However, that is not much comfort.  I was hoping for another long beach walk this weekend, but it will have to wait.

It appears that we will be back in the fifties and sixties by the end of the March.  I guess we will have to dream a while about the return of those eighties.  That is not a problem.  This time of year I am used to dreaming about summer days.

Oh well it is nice to see our great blue heron buddy back behind the house for a last visit before spring.
Posted by Ocracokewaves at 12:44 PM No comments: