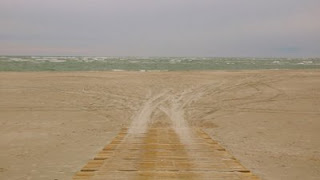 NBC News is reporting that 75% of the American public think the country is headed in the wrong direction.

That puts anyone looking for change in the majority. I know government is not the answer to everything.

However, government needs to be part of the solution, just as much as corporate American needs to revamp itself.

Last spring Wired had an article, "Breaking the Rules: Apple Succeeds By Defying 5 Core Valley Principles." One of the points in the article was the following.

5. CODDLE YOUR EMPLOYEES
Valley Rule
Since the best ideas bubble up from within the ranks, encourage autonomy by allowing workers free time to focus on their personal projects. Also, shower them with perks like free food and massages to make them feel special.

Apple Rule
Motivate through fear. Don't be afraid to scream. Threaten to fire them. Withhold praise until it's truly deserved. Go ahead and bring them to tears. As long as you can inspire them with your sense of mission, they'll consider this the best job they've ever had.

At the time, it appeared that Apple and Steve Jobs could do no wrong. Ten months and Steve's health problem have changed the equation.

Steve has built a company that has with his help turned out some fantastic products. My guess is that Steve has not created a management style which will benefit other companies or America or aid Apple in building a long term proposition.

I continue to believe that the best management technique is to build strong interdependent teams where individuals are committed to supporting each other and to mutual success. Apple being enthralled by slash and burn management techniques where employees are often afraid to convey anything but good new has a weak leadership culture as a result.

I saw Apple corporate employees rush to cancel events where results would be anything less than perfect. I saw a brochure about security in a new operating system take longer to write than the operating system because people were so afraid of making mistake. I saw a simple customer request ignored by a handful of vice presidents because everyone was afraid of making the wrong decision.

What we need today is a culture in both government and private corporations which emphasizes accountability but also recognizes that you rarely get something right without making some mistakes along the way.

If you are honestly focused on trying to do the right thing for the right reasons, mistakes should be written off as long as progress is made towards a solution.

No business and certainly few government officials are immune to the politics of personality. New leaders try to make their marks, and when the personality becomes more important than the solution, more problems are created than solved.

Now that Steve Jobs is gone, Apple will continue with the products it has in the pipeline. Some will undoubtedly be successful. However with an attitude that typically ignores customer input and focuses on delivering margin to the company at the expense of value to the customer, I think the long term outlook for Apple is negative.

Articles such as the recent WSJ one, "I Once Was Chic, but Now I'm Cheap," indicate that others are questioning the value proposition of Apple. I have long suggested that Apple's market share will peak at 10%. The culture of Apple is to create the easy hit and move on to the next one, often with little effort beyond exacting the highest price from the most people in the shortest time.

I cannot hold Microsoft's Vista up as an example of success, but I can credit Microsoft for a strong effort to fix the product and deliver a new one that is better. Vista is a far better product today that what it was sixteen months ago when I first purchased it.

Certainly Apple's Leopard came out of the gate as a far better product than Vista and has shown some improvement. However when I look at Apple hardware line, I am disappointed.

The MacBook went up in price, the MacMini is still spec starved, and we are still waiting for a new iMac and a product between the iMac and Apple's expensive towers,

In the end, I want better, lower cost products not just hit products from Apple's culture of fear.
Posted by Ocracokewaves at 7:28 AM No comments: 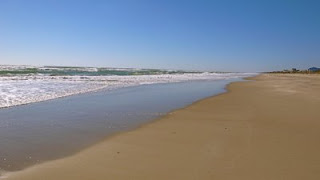 Most people associate the beach with hot summer days and vacations. However, beaches do not disappear when children go back to school.

They actually stay in business all year here along the Crystal Coast. I can think of a handful of really cold days over the last few years when I stopped by the beach to find it completely deserted.

However, those days are definitely the exception rather than the rule. Almost every visit to the beach I find someone walking along the water. In January there are likely wearing jeans and tennis shoes instead a bathing suit, but people are still on the beach regularly in the winter.

I love sunny skies so I typically do not go to the beach when it is very cloudy like it was today, but I know from experience that a day in January when the temperature topped out at sixty-five degrees Fahrenheit is likely to have drawn a few beach visitors.

It will not be long before the North Carolina sun starts to really provide some heat which will make walking the beach a true winter pleasure. I am counting down the days before I will be able to get in the water once again.

Last year my first dip was June 3. This year I am hoping that I can get wet in May, but I have no desire to jump into cold water so I will wait until the water has reached a civilized temperature.

Some people need some salt water scenes to get through a snowy winter. I am happy to help.
Posted by Ocracokewaves at 3:31 PM No comments: