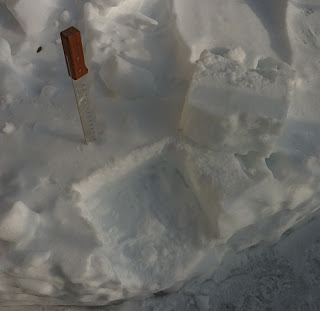 One of the important tools for life that I had before I met my wife was a snow saw. We have been married for over thirty years, and she maintains that I have never used it even in our many years living in a snow belt in Canada.

Being a very practical lady she has never figured out why I needed a snow saw, but I am certain many fellow adventurers will agree with my decision to have a snow saw before moving to the Canadian wilderness for ten years. It might have been used as much as my felt lined boots, but one never knows when the right tool will be needed.

Perhaps my wife is exaggerating, but those of us who have been married over thirty years know better than to seriously challenge any of our wives' long held beliefs. Given the challenge to my credibility , this most recent snow offered an opportunity that I could not pass up.

Any readers living on the east coast north of North Carolina, probably would agree with my assessment that much of that area, especially Virginia, meets the definition of a winter wonderland. Snow is everywhere and has taken on qualities not often seen in these parts.

In describing the snow that has been on the ground in Roanoke, Virginia for the last several weeks, I have recently used the term igloo snow. I came to that description after a lot of moving snow which involved cutting blocks of snow and then shoveling it.

Yesterday my wife mentioned that my allegedly unused snow saw was downstairs if I needed it in my snow removal efforts. This morning I decided that the time had come to put to rest the unfounded rumors about my snow saw's work history.

Since snow is everywhere in Roanoke, all I had to do was open our deck door and cut a block of snow. I will admit to using a dustpan to extract it, but that perfectly sawed block of snow is still a fine block of snow which I am sure could be used as a first building block for an igloo.

If my granddaughter happened to be here for this adventure, I might head out into the front yard and start cutting blocks two through one hundred. I have no doubt that we have plenty of snow for the job.

So let it be recorded officially that on February 17, 2010, nearly forty years after its purchase, there is conclusive photographic evidence that my snow saw has cut a block of snow.

With this being a winter where snow is even being seen on North Carolina's Crystal Coast, I hope that these unusual conditions are not part of a global cooling trend. However, if that is the case, I have the right tool for the climate change. Be sure to click on the image for a better view of my snow saw.
Posted by Ocracokewaves at 5:52 AM No comments: