Peace on the water 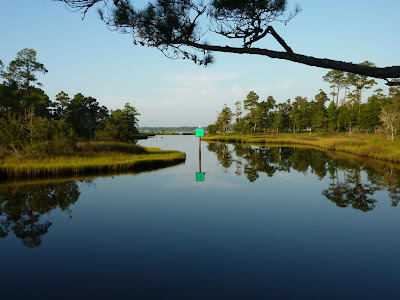 One of the things that I look forward to each morning as I roll out of bed, is walking across the road to check out the water in Raymond's Gut. While I often first look at it from the dock behind my home, I enjoy another view which lets me see all the way out to the White Oak River.

I am alway especially pleased when the waters are so calm that they form mirrors for the scenery. It is a pretty neat way to start the day.

It certainly beats a freeway and bumper to bumper traffic. I was just finishing a post about how hard it is to find good jobs in the places where it is a pleasure to live.

If you have lots of jobs, you might have too many people in paradise so I am not going to wish for over development. We have lots of places in North America that can lay claim to being over developed. The Crystal Coast is not one of them.

With crystal clear waters that give us our name and water within in sight almost everywhere, it is no surprise that many people move here because of the opportunity to be close to the water.

Having the chance to start your day looking at water and end your day watching a sunset over water is a great privilege. It also helps to keep your soul energized.

When the world around you is so beautiful, it is hard not to have good thoughts. I am probably a whole lot easier to deal with just after my morning walk to see the water than I am after sitting in an office with only a print for my water view.

Of course the water can be powerful and dangerous. It is suicidal to ignore its power.

I guess you could say that with great beauty comes great power.

I am pleased to be under the spell of the water. It certainly makes the outlook for tomorrow a little more pleasant.
Posted by Ocracokewaves at 8:27 PM No comments:

Our primary home is in a small subdivision called Bluewater Cove. We live just across the cul de sac from the swimming pool pictured in the post. The pool and water access for boating are the main reasons that we live on the Carolina coast near Cape Carteret and Emerald Isle.

We have had the privilege of living in a wide variety of places from the isolated shores of Nova Scotia to the suburbs of Washington, DC. We have lived on a farm in a small community in New Brunswick, Canada. For twenty we were on the slopes of a mountain overlooking Roanoke, VA. My wife and I both grew up in Mount Airy, NC otherwise known as Mayberry. We even owned our family home there for a while.

We have had the experience of driving twenty miles to the nearest grocery store. We have also seen our kids be able to come home for lunch from school. Given that wide variety of experiences we have chosen Bluewater Cove in western Carteret County as our latest place to live.

I just penned an article, When the small stores leave. It is about my concerns on the hollowing out of commercial services in the area where our home is in Roanoke, Va. It seems that all the commercial enterprises want to be in the same concentrated areas. The result is that neighborhood services are disappearing. Perhaps this is inevitable.

I still remember walking to the local hardware, drug store, and movies when I lived in Mt. Airy. When I lived in Lewisville, NC, I could walk to school, church, hardware, and grocery store. There was even a small restaurant within walking distance. Much of that has disappeared.

We saw the planned development model when we lived in Columbia, MD and the years that I worked in Reston, VA. While having controlled development might help rationalize some decisions, I am not sure it works very well either. I know in Columbia all car services were pushed to the outskirts of town. In Reston neighborhood grocery stores have disappeared.

On the North Carolina coast we have a long commercial strip probably five miles in length. Most of the homes are on roads that branch off of the commercial strip. Homes still on the strip are gradually being converted to commercial businesses.

In spite of the small population in the coastal area, we have better access to many services than we do in a larger town like Roanoke. Today in Roanoke I drove several miles to get a bag of pea gravel. It probably took me nearly an hour before I found what I needed. I could have accomplished the same task in under ten minutes on the Carolina coast.

It is almost counter intuitive that I could get something done more quickly where in theory there are less services. However it turns out there are actually better located services in the smaller area. Roanoke has two Lowe's Home Improvement stores and two Home Depots, all are about 20 minutes from our home. There is no hardware closer to our Roanoke home than ten minutes.

In Cape Carteret on the Carolina coast, we have only one Lowes nearby, but it is only seven minutes from our house. There are two hardware stores under ten minutes and another two at about fifteen minutes. There are other Lowes and a Home Depot within twenty to thirty mintues.

Things are similar when it comes to grocery stores, but if you start looking at medical care, Roanoke has far more resources which are close by.

What is surprising is that aside from medical care, life in a rural area like Cape Carteret stacks up pretty well.

The good news is that Carteret General Hospital has decided to build an imaging center close to us. Hopefully that is the first step in addressing additional medical services for the area.

With a Walmart probably coming to town in 2010, we will have just about all the modern conveniences that we need. My wife would only add that we need a Target.

Maybe intelligent development happens if you plant yourself in the right spot. I hope western Carteret County is it.

It certainly is not hollowing itself out like Roanoke is at the present time.
Posted by Ocracokewaves at 7:50 PM No comments: